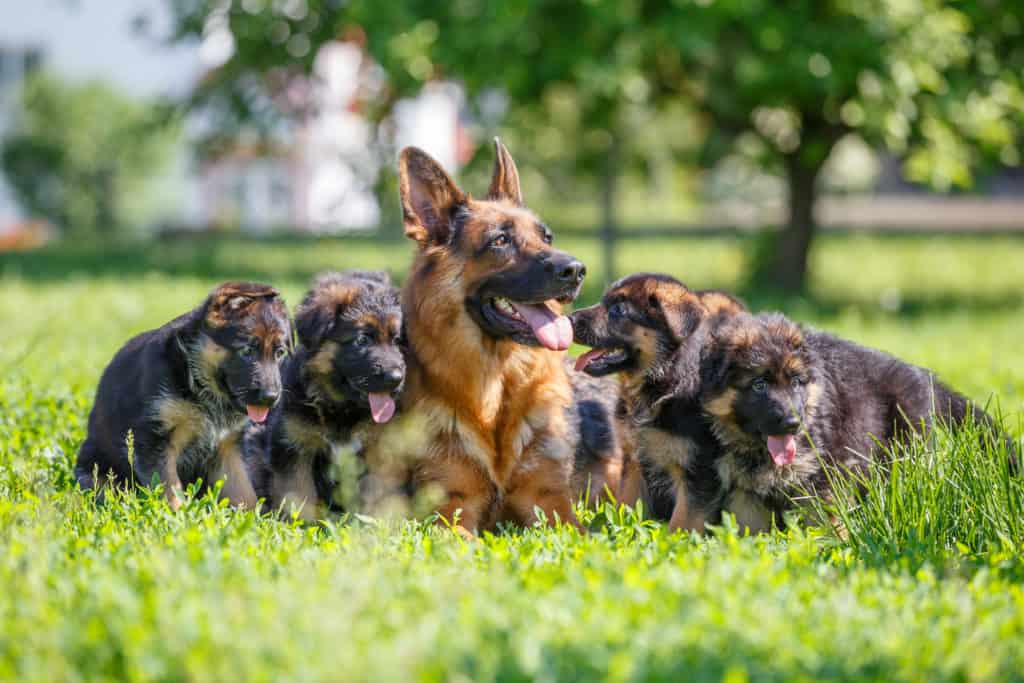 If you are planning to breed your German shepherd, you might be curious about the number of puppies she will have.

German shepherds are big in size so they deliver a large litter which ranges from 6 to 15 puppies. The size of a litter is determined by many factors such as health, diet, age, size, and individual genetic of your German shepherd.

This article explains the factors affecting the size of a litter, what to expect from a pregnant GSD, and how to take care of her.

What Determines the Size of a GSD Litter?

A healthy German shepherd will produce many healthy puppies compared to an unhealthy one. Always take your GSD to a vet clinic to confirm that she is in a healthy state.

Big size GSDs are more likely to deliver many puppies compared to medium size GSDs. This is because the larger ones have a bigger carrying capacity.

Diet plays a crucial role in influencing the size of the litter of a GSD. Feed her a balanced diet rather than only kibble throughout.

German shepherds are more fertile between the ages of two to three years. If she gets older than that age, she is less likely to deliver a large litter.

If a German shepherd delivers a large first litter the chances are that she will do the same in the second and the third litter.

Gestation period for a GSD

Their pregnancies take around 64 days which is a little more than other dogs. This is influenced by their bigger size.

What to Expect of a Pregnant German Shepherd

The appetite might increase or decrease depending on the stage of pregnancy. She can show signs of morning sickness like vomiting. In case of a reduced appetite, you should try to feed her her favorite meal.

If your GSD feels exhausted most of the time, she will be taking a nap more than usual. If your dog likes sleeping a lot, this sign might go unnoticed. Unless you have confirmed that she is pregnant, sleeping a lot should be seen as a red flag especially for active dogs.

Behavior change will depend on an individual dog. Some German shepherds will seek extra attention and will be around you most of the time, while others will like isolation and will be hostile whenever you get closer to them.

A pregnant German shepherd will gain weight by 20% to 50%. Her abdomen will enlarge, though this is among the last signs of pregnancy. This should not worry you as she will be back to her normal size once she delivers.

The nipples of a pregnant GSD will enlarge because of accommodating milk. The nipples might get dark red in color. Other times the milk might leak in the late stage of pregnancy.

A female German shepherd can increase the no of times she urinates during pregnancy. Sometimes it can be territory marking. She can pee anywhere, in the living room, the seat, or in the corner of a room.

During the last stage of pregnancy, she will start preparing a place for the expected puppies. She will shred anything from blankets, newspapers, or clothes and keep them in her nest.

What Kind of Attention Should be given to a Pregnant German Shepherd?

Feed your expectant German shepherd a balanced diet. Buy her the best dog food you can afford. It is advisable to increase the quantity of food you feed her. Instead of giving her a lot of food at once, divide the food into smaller portions and give it to her many times.

2. Frequent Visits to the Vet

If you confirm that your GSD is pregnant, you should visit the vet every week or biweekly. This is to ensure that that the mother and the unborn puppies are healthy.

Due to hormonal changes, your dog will have mood swings. If she is not willing to eat or play do not compel her. Just give her space to be herself.

A whelping box is set on the last stage of German shepherd pregnancy. It is a safe and comfortable place equipped with all the necessities needed for safe delivery. The place should be noise-free.

German shepherds are caring parents. After birth, they lick their young ones as a way of cleaning, but it is your work to clean the other puppies that she won’t clean. In rare cases, German shepherds eat their newborns. Be watchful to avoid such instances.