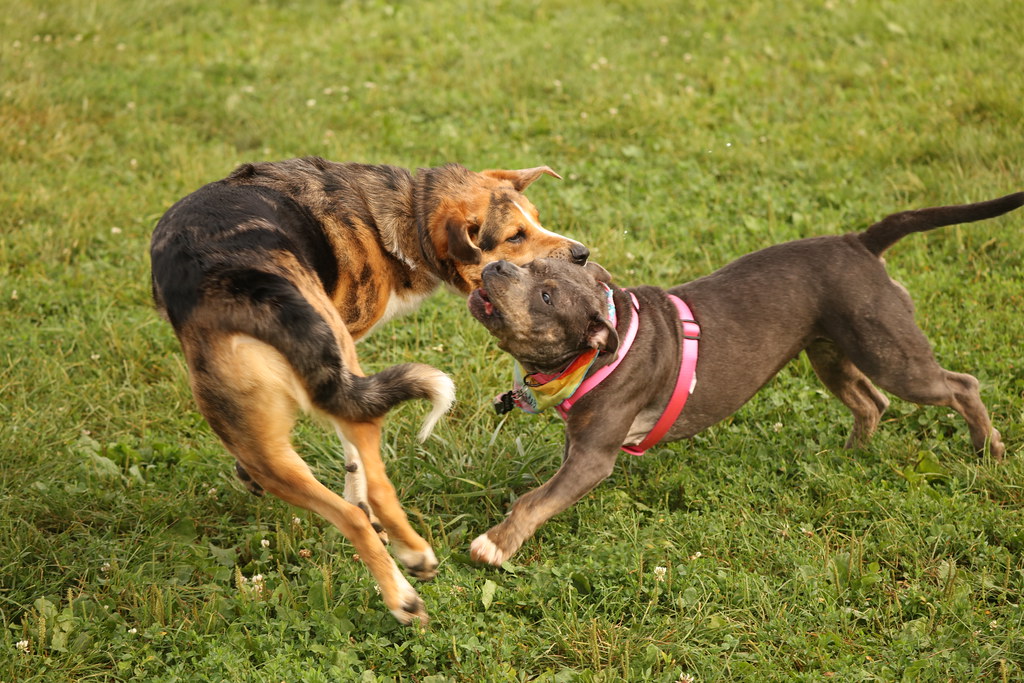 German shepherds are known for their crucial job in the police force while Pitbulls are mostly known for their intimidating looks. It can be hard to decide which dog breed you can place your bet on if they were to engage in a fight. This article will give you tips on which dog to support in the Pitbull vs German Shepherd contest.

A German shepherd can defeat a Pitbull. This is possible because of the GSDs’ height, weight, and strong biting force. Pitbulls were initially bred to be fighting dogs. A well-trained, healthy, and hostile Pitbull will overpower a German Shepherd.

Read on to know the factors that can contribute to either of the breeds winning the fight.

Why a German Shepherd Will Defeat a Pitbull

German shepherds are big in height, this will work to their advantage in a fight. A small GSD will not defeat a Pitbull.

German shepherds are heavier than Pitbulls which can help them to hold Pitbulls down.

Have a Stronger Bite Force

PSI is the unit used to measure a dog’s bite. A German shepherd has a bite strength of 238 PSI while Pitbulls have a bite power of 235 PSI.

German shepherds are devoted to their owners, if the reason why the fight broke between them was triggered by a Pitbull attacking the German shepherd owner or kid, the chances of winning the fight will be high.

If a Pitbull attacked a Germans shepherd alone, he will give up easily.

The Availability of Neck Hairs

When Pitbulls and German shepherds are fighting, they mostly target each other’s necks. German shepherds have more hairs on the neck compared to Pitbulls which acts as a barrier to prevent them from teeth marks.

Why a Pitbull Will Defeat a German Shepherd

They were Trained to Fight

Both Pitbull and German Shepherd Were Trained To Fight

If a Pitbull is trained to fight, he will be more hostile than a German shepherd with the same training.

If either of the breeds is not purely bred, it will make a great impact on who will defeat the other.

If a Pitbull is a pure breed and the German shepherd is mixed with some other breed, the Pitbull will win.

Age is a factor to consider when accessing which of the two breeds is to win a fight.

The amount and quality of food that a dog feeds on will determine its strength and health. If a Pitbull is fed on a balanced diet in the correct amount, he will overpower a weak German shepherd.

However, if a Pitbull is overfed and is obese or, is weak from poor feeding, a German shepherd will easily defeat him.

If you do not want any fight between your German shepherd and a Pitbull in your neighborhood, you should find ways to prevent the fight other than separating a fight always.

You should make sure that your pooch is in the compound by building strong or electric walls. You can also use an electric leash, these methods can traumatize your dog.

The best method is to train your dog to stay in the compound, this is a less expensive and humanly method.

You can also approach your neighbor and request him to put his Pitbull on a leash.

My German Shepherd and A Pitbull are fighting- What Should I Do?

If you find your German shepherd fighting with a Pitbull, you should be cautious when separating them.

You can sustain injuries if you separate the dogs in an unprofessional way.

You should pull the leash of one dog with enough force so that he must open his mouth. If you are two, each person should pull one dog and move to a far distance.

Many factors determine who would win in a Pitbull Vs German Shepherd fight.

If either of the dogs is purebred, size, diet, age, among others are used to assess who will win.

It is reasonable to use precautionary measures to avoid a Pitbull and a German shepherd fight. A fight can cause harm to you and your dog.